From Disaster to National Model

10 years after the Joplin tornado, disaster response has become an AmeriCorps staple, focused on serving communities – and the human spirit

Within hours after one of the nation's deadliest tornadoes ripped through Joplin 10 years ago, the first team of AmeriCorps members arrived. They immediately went to work, setting up a missing persons hotline and opening a volunteer center at Missouri Southern State University to handle the 3,000 volunteers who showed up the next day.

In the years that followed, more than 425 AmeriCorps members from across the country served in Joplin, assisting more than 3,000 households. They removed tons of debris, provided homeowner assistance and casework, operated donation and distribution warehouses, provided legal services, and repaired and built homes.

Most importantly, AmeriCorps members, working with federal, state, and local agencies, played a critical role in helping bring order, safety, and direction to more than 150,000 citizen volunteers who came to Joplin to offer needed assistance and hope, delivering more than 1 million hours of service. AmeriCorps members were instrumental to mobilizing an influx of volunteers and donations, which later saved the city more than $17.7 million in disaster costs.

On the 10th anniversary, Acting CEO Mal Coles issues a statement to the volunteers and community members whose lives were forever changed.

“Joplin will always have a special place in the heart of AmeriCorps. Even in its bleakest moments, the city opened its doors to our members and thousands of volunteers, welcoming them with open arms. While this made the hard work a little easier, it is ‘the miracle of the human spirit’ that carried this heartland city toward recovery.” / Mal Coles, Acting CEO

This video shows the vital role AmeriCorps played in supporting the people of Joplin as they recover and rebuild after the deadliest tornado in more than 60 years struck Joplin, Missouri on May 22, 2011. 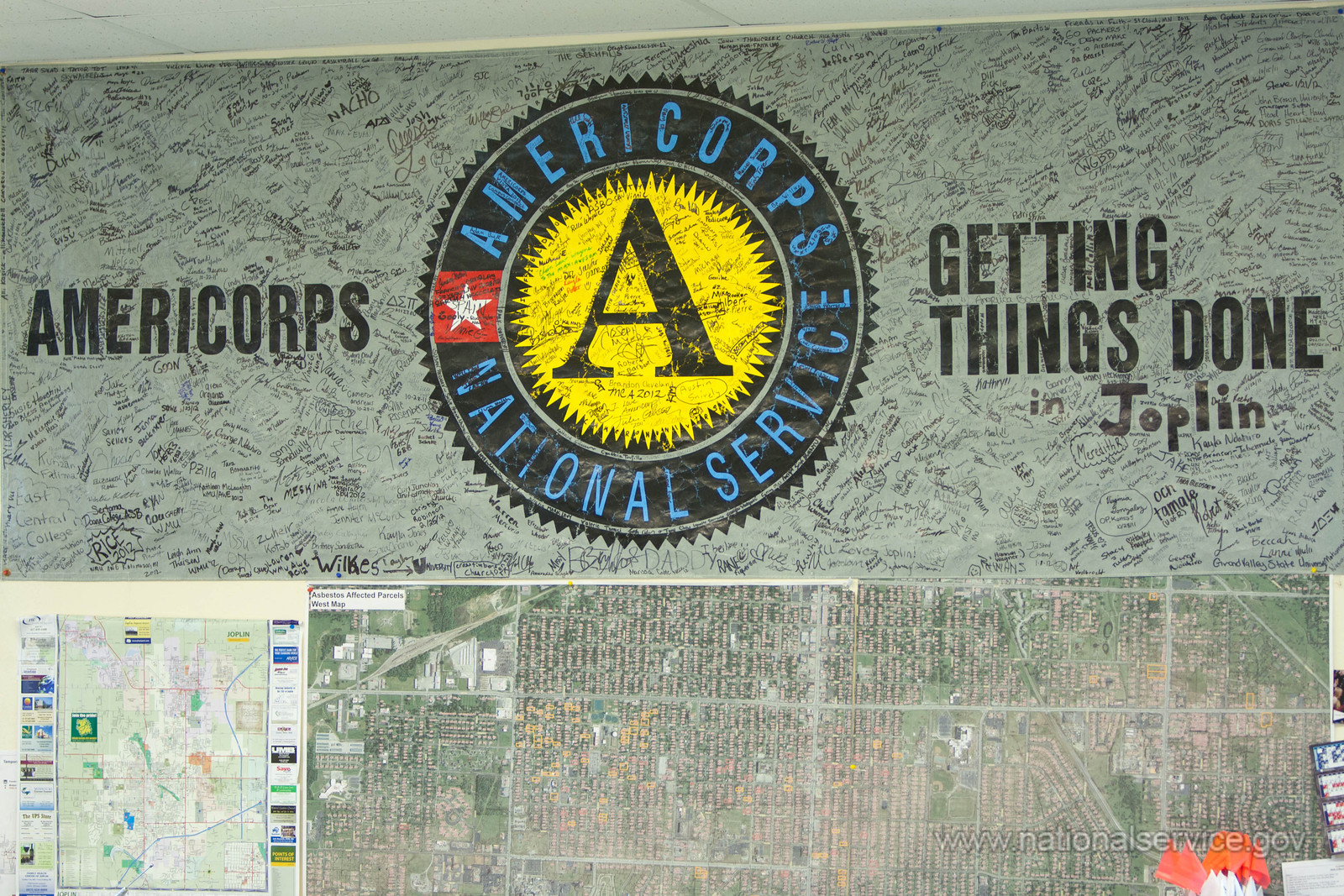 “No city in America is more grateful for AmeriCorps than Joplin. No city believes more in the group’s mission. These young people have been with us since day one, and while their hours can be counted and a dollar value put on their labor, what they have given to and done for Joplin since May 22 is immeasurable ….AmeriCorps has done heroic service for Joplin. Tapping deeper into its strengths just makes sense.

“The members of the Missouri House of Representatives join unanimously to applaud the history, goals, and accomplishments associated with the AmeriCorps program and to convey to all of those involved this legislative body’s most heartfelt commendation of their efforts in Joplin and Duquesne following the devastating EF-5 tornado,” states Missouri House Resolution 244.

“The Miracle of the Human Spirit symbolizes the incredible outpouring of volunteers who have lifted Joplin out of the rubble. Countless volunteers from all walks of life have offered themselves to the Joplin effort without request, serving as a reminder of the overwhelming power of human generosity and the steadfast tenacity to rebuild the once broken city…Joplin and its residents are eternally grateful to those heroes.”

A section of Cunningham Park in Joplin is set aside as a tribute to AmeriCorps members and other volunteers who came to help in response to the May 2011 tornado. Symbols of the volunteer response are cast in bronze – a sledgehammer, work gloves, an AmeriCorps hardhat, and a simple plaque.

PreviousAmeriCorps Partners with MTV Entertainment
NextWhat’s at your core? Put your values into action and serve.
Back to main content