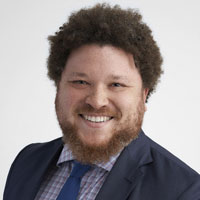 Fagan Harris was nominated to join AmeriCorps Board of Directors by President Biden in July 2021 and confirmed by the U.S. Senate in December 2021.

Harris is a social entrepreneur, writer and researcher who has dedicated his career to advancing impact career opportunities for underestimated communities.

As the co-founder and CEO of Baltimore Corps, Harris has led his team to re-imagine recruiting, hiring, and career advancement for underestimated communities. In 2020, Baltimore Corps played a leading role in the Baltimore Health Corps, a $12 million initiative that enlisted hundreds of city residents in Baltimore's pandemic response as full-time public health professionals. The Health Corps earned national attention as a model for centering racial equity in large-scale workforce development. In 2021, Baltimore Corps launched citycorps.us, which will deploy the organization's model in cities across the United States.

Harris currently serves as the assistant American secretary for the Rhodes Trust, where he helps oversee the scholarship's annual recruitment and selection process. He is a trustee at the Johns Hopkins Hospital at Bayview and the Enoch Pratt Free Library. He serves as the national board president of Lead for America. Harris is also a board member at several Baltimore-based social enterprises including B-360, Infinite Focus, and H.O.P.E (Helping Oppressed People Excel). Harris chairs an impact consultancy that guides leading institutions to integrate Environmental, Social, and Governance into their core practices and operations. He started his career at College Track where he helped build its College Success strategy and program. In 2011, Fagan staffed the White House Council for Community Solutions in the Obama Administration.

Harris was named a fellow at Ashoka and Echoing Green for his work in social entrepreneurship. In 2020, he was awarded the Dial Fellowship by the Emerson Collective. Harris is a proud graduate of Maryland Public Schools. He is an honors graduate of Stanford University where he was the recipient of its top undergraduate honor. He earned a master's in philosophy from the University of Oxford where he was a Rhodes scholar.