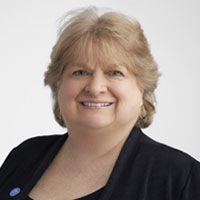 Catherine McLaughlin was nominated to the AmeriCorps Board of Directors by President Biden in April 2021 and confirmed by the U.S. Senate in December 2021.

McLaughlin serves as the founding executive director of the Biden Institute at the University of Delaware. The institute, established in 2017, brings students together with accomplished, respected practitioners from a broad diversity of backgrounds and a wide range of policy fields to equip aspiring public servants to elevate civil discourse and take on pressing policy challenges facing our nation.

Prior to joining the Biden Institute, McLaughlin served as the Executive Director of Harvard University’s Institute of Politics for 22 years where she oversaw all programming including the JFK Jr Forum, the resident and visiting fellows program and national conferences for new-elected mayors and members of Congress. McLaughlin has created a national consortium of similar institutions that bring together students from across the country annually to identify ways to engage college and university students in the political process. She also co-founded the institutes’ Biannual Youth Survey on Politics and Public Service. She previously served as Tour Manager for the Boston-based band New Kids on the Block and as director of the Office of Alumni Affairs and coordinator in the Press and Public Liaison Offices at Harvard University's John F. Kennedy School of Government.

McLaughlin earned her BA from Saint Anselm College, where she currently serves as a member of the board of the New Hampshire Institute of Politics.